Leaving Noel McCormack’s Ballroom just after midnight after having been amongst hundreds of people for hours, it’s hard to believe that it was possible to chat to the Dubliner in a perfectly relaxed way – with no people around other than his staff – when I entered the place at 6pm.

To meet Noel McCormack on his own pub turf – Noel’s Ballroom – is an experience a lot of Leipzigers talk about. Noel is known for his readiness to chat to anyone about anything. Here’s a publican who still spends 40 hours a week working behind the bar – out of sheer passion. Of course, running a restaurant and bar involves much more than just taking orders and pouring pints. It takes up most of your time: “I’ve always been working 60-70 hours, 7 days a week, for most of my life. You just can’t take it easy for a while and then come back again. If you stop doing the bar, you‘ll start losing the knack of it,” states Noel, as he sips on his glass of water and gives me a reassuring smile. You can still hear the slightly nasal sound of Ballymun swinging in his voice, just as though he’s never left Dublin. 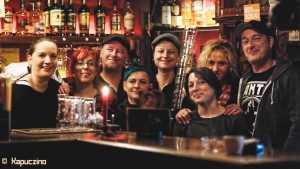 He did, however, leave some 23 years ago and made a life abroad, just like so many other Irish people before him. You’d think he’s doing quite well for himself, and I’m quick to find out that he’s as down to earth as they come.

Making a home away from home

Noel first set foot on the back then quite rocky roads of Leipzig in his early twenties, training staff in the art of running an Irish Pub in an East-German town. Leipzig had turned its back on the former communist block behind the Iron Curtain for a mere three years at the time. He’d worked in bars ever since he can remember, first collecting glasses and later serving pints in his uncle’s pub in Dublin from the age of 16 onwards. When he saw a job advert about training bar staff in Leipzig, he took heart and signed a 12-months contract. “I didn’t know anything abot the place. It wasn’t a well paid contract at all, but I was never mad after the money. Leipzig was a pretty run-down place back then, but nowhere near as rough as Ballymun, so starting off somewhere new felt really good.”

Growing up in a council estate and seeing a majority of his friends from the infamous high-rise flats afflicted with drug problems and the like, he enjoyed the challenge that starting a new life in post-communist Leipzig brought with it. Noel worked in a variety of bars, 7 days a week, 10-12 hours every day and night.

There are no strangers…

“I learnt to speak German like a local in just over a year, because I was thrown in at the deep end. Nobody spoke English back then, not three bleeding words between two people,” he muses and exhales another lung-full of smoke before he continues. “Bars came and went like the season. I got hired by one of the better ones, and for years I would eat, drink, shit and sleep in the joint. I was able to barter for a better deal whilst getting accommodation in the same building. Maybe it all came together because I offered a different package as a bartender to what they were used to.“

The Ballroom is already the second bar Noel owns in Leipzig. He first opened the “McCormack’s” on Karli in 2001. To get it off the ground, he was smart enough to put money aside and then was able to obtain subsidies from the municipality and a loan from a bank. He managed to turn the pub into one of the area’s favourite bars. Unfortunately, he doesn’t run the place himself anymore as the landlord wouldn’t grant an extension when the lease ran out. We can only speculate as to the reasons why. His first bar established itself as a place where vacant seats were sparse, and the locals showed a lot of love for the way Noel put his motto into place: There are no strangers, just friends you haven’t met.

Noel’s ballroom then and now

Thankfully, back in 2008 he had already taken over a former Italian restaurant that was left in quite a desolate state. “For over three months, me and the lads gutted the place before we could even think about giving the walls a new lick of paint. I’ve always wanted a real traditional Irish pub, so I furnished the walls with matured dark wood. I sent my father on a mission all over Ireland to collect all the vintage knick-knacks you can see here now. He must have gone to every car-boot sale he got wind of for over a year.”

Noel takes me around the place and shows me all the different facilities. There are several smoking and non-smoking areas, a sizable beer garden in the back and a big room with a stage. The whole place can easily host about 300 people, and every little corner of the pub is decorated with great love for Irish detail. It’s striking that you can notice people of all ages and from all walks of life here, something that’s quite an uncommon sight in bars in Germany.

“That’s what gets me out of bed in the morning,” Noel explains. “Most human beings are nice when you get to know them. And the nicest of them all I get to see every day – my staff. They’re all really lovely people. Running this bar is a dream come true.” 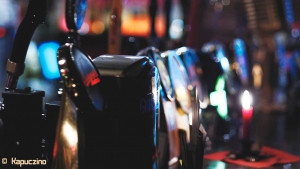 Noel looks at his watch. It’s 7pm already, and we’ve been chatting for over an hour. He thanks me for taking the time and excuses himself. I go to the bar and order a pint of Guinness. A friendly girl with perfect English pours the pint, lifts the glass and lets it settle before she tops it up. She puts it on a beer mat in front of me. I watch the foam rise until the black stuff holds a slim and firm white head. I carefully inspect the head and look for bubbles –none. I take a fist sip to let my gums produce a verdict, and I can feel my eyes widen in disbelief. That’s the best pint I’ve had since the last time I went to Dublin. Sláinte mhaith!

The Trouble Notes: “written on the road”

A cosmopolitan butterfly that feels at home where people are friendly and coffee is strong. As a person with a wide range of interests and a low attention span, he succumbs to the charm of novelty all too readily. Literature, film, photography and politics on Mondays, playing dead and g(r)ooming dogs on Tuesdays. Hand him a beer and he’ll talk about football, tell him a lie and he’ll tell you two.

Putting the "American" in American football

Overland travel on a shoestring budget

Latest from My Leipzig

Die Villa and its legendary Sprachabend

"In Die Villa I have learned Slovak and a few words of Esperanto; I have practised

You can say hi to the folks at interaction Leipzig at their winter party. Finally the

Moritzbastei is hard to miss - it's a huge building located in the city center, right

Smut Slam Leipzig is a place for all types of performers. The setting is casual, facilitated,

GET TO KNOW LEIPZIG AND ITS QUARTERS

The city consists of various quarters, each with its own unique atmosphere and allure, which you

The Trouble Notes: “written on the road”