War is a destructive force causing tectonic shifts of reality. At the same time, it is a source of inspiration.

My experience of the dramatic events in Eastern Ukraine following the Russian aggression in the Crimea and Donbass laid the foundation for my poetry collections “The One Who Was Able to Resurrect” and later “The Paths of a Hermit”.

I wanted to change the political situation with the infinitesimal fraction of my own participation, so I joined the Ukrainian volunteer movement. At the front line, I found friends and kindred spirits. My feelings for them poured into poetry.

The texts were born out of the strain of the war that was difficult to withstand. I found you can’t really influence the course of events directly but they cause your heart to implode.

When I read my work in front of audiences I need a couple of days to recuperate afterwards because the emotions I sewed into the poems tear through the texture of the text: the grief I felt when I witnessed deaths, the strain of attempting to support my friends in difficult situations at the front, the dismay of not being able to control the outcome of the battle, trying to defend those defending our country, and facing the enemy’s artillery and tanks.

The sincerity of my poems must have given them a new life entirely separate from me.

People quote them, and this is the highest reward for an author. One of the poems, “Girls”, was turned into a song, a eulogy for women and girls defending their motherland, and was performed by Ukrainian Eurovision Contest participant Anastasia Prykhodko and a volunteer paramedic, Darya Zubenko. It is now part of the CD “Songs of War”, distributed free of charge among the soldiers at the front.

The collection puts together a jigsaw puzzle of feelings that the war brought to Ukraine.

But what moved me most was when a young woman, a paramedic, had several lines from this poem tattooed on her arm. These lines became her life motto. 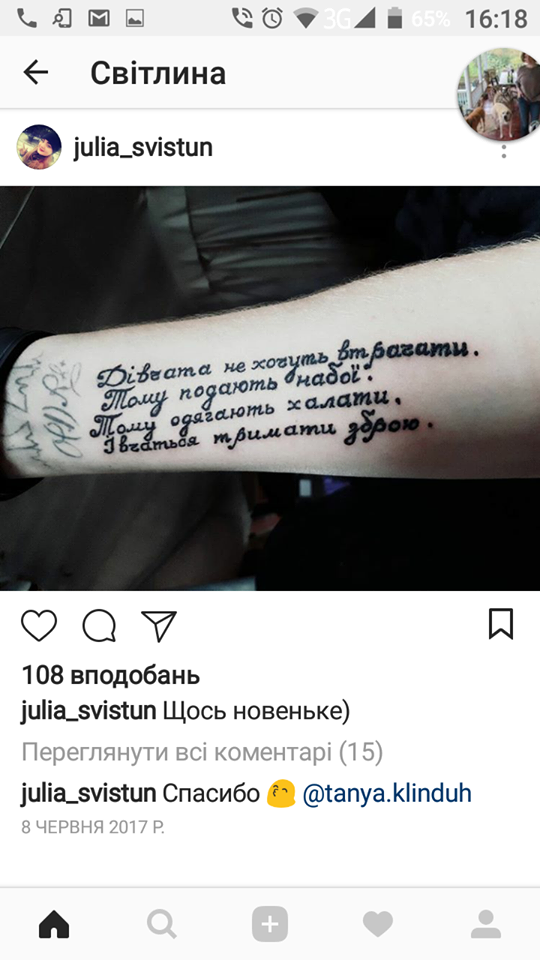 If anything positive can be found in the phenomenon of war at all, it is an opportunity to meet a great number of people, sharing one’s own views and one’s deep experiences of the current moment. I had numerous meaningful encounters while volunteering, not only with my compatriots, but with people from abroad as well – those who sense a raw nerve of urgency in modern Ukrainian history.

For example, Thomas Mettler from Switzerland found a source of inspiration for his performance “Some Men Must Die”. Currently, the artist continues developing this theme, and he saw my poems as color highlights for his experiences in Ukraine, to underscore his project. I’m not revealing his plans in detail – we’ll see the product of his creative work in less than a year.

I my view, art is a good means of communication with foreign audiences when relating the path Ukraine is now traveling, focusing rather more on emotions than on facts. If this art is authentic, there will be no borders for its perception.

By Olena Zadorozhna
(Translated from the Ukrainian by Svetlana Lavochkina)

Olena Zadorozhna is a Ukrainian journalist, poet and social activist, laureate of several national awards for literature and journalism.

FROM “THE PATHS OF A HERMIT”

By Olena Zadorozhna
(Translated from the Ukrainian by Svetlana Lavochkina)

Throw fire into their faces
Throw fire into the water
The bloody winter in Kiev
Red stains on the stairs of concrete
The singeing fire of trauma
The grey cobblestone stooping
The peeling walls of the restaurants
Crumple the memory pamphlets
Until your palms start hurting
The salt veil shading the morning
Your temples forever pulsing
With captives’ faces, both genders
Flashbacks within you exploding
Part of you left on this pavement
Somewhere over the clouds
Your smoldered heart
Parched by cocktails
A drop of hope on the bottom
Flights cut short by the ceilings
Throw fire into the water
Throw sand onto their faces
Hold freedom tight in your hands
May it one day come in handy.

Let the war go
By blood transfusion
Rewire the motherboard
Delete all memory
Pour in the new
Engrave the word
Happiness
Letter by letter
Make up for the loss
Fail to catch up
Fall down midway
On your knees
Fumble
Step
On an antipersonnel mine
View
The filmstrip of your life
And in truth,
Find a rusty
Horseshoe

acquaintances turn into strangers, glasses become half-empty
I don’t demur, I keep walking along the path of a hermit
meeting the fellow pilgrims, greeting them all in silence
words are totally useless, as is this fiendish smirking

how to survive this winter? the sky is slashed in the middle
with tracers drafting destiny – the killing power distance
when the ice queen arrives in a shroud
to squeeze your heart in her pincers
the ice queen comes to give you her love made of steel and nickel,

the piercing cold of her hatred brands itself on your plexus
from its dehydrated eye sockets indifferent December glares.

you’re indeed foolhardy
she’ll never forget this last glance
what else do you want from me bitch
red spittle, your head held high up
blood, sleet or tears of yesterday, now all has dried

you’re indeed unyielding
ceilings cave in, pontoon bridges crumble like glass
ahead of you craters, behind you, death measured in kilotons
explosion debris, pain from heaven, your brothers
whisper don’t fall, don’t fall, you must reach the goal – for us

such is the weather
that knowing no path
you rush headlong into the mud
to reach you I need eternity
too late for cooling the water
for putting the fire out
we clambered up the tall towers
put our flags up
do you hear me brother
just don’t burn down there sky-high
these wheels
cutting the road
this spring
will carry distress in your pickup
a handful of cartridges
in that darkness, that water
more people will drown
on foot heaven-bound
and everyone whispers
don’t cry this must happen
I’ll rise from the dead
in you

Our wonderful Literary Parlor returns with a very special holiday edition: Svetlana interviewed some of her